I have cached with a lot of different characters over the years.  I took this video of a bunch of them acting like turkeys yesterday.

Have a video or picture of you out caching, send it to me, and we'll get it posted.

Posted by Unknown at 7:44 AM No comments:


We will have a few special guests on Sunday visiting the GPS exhibit at Exploration Place, Sen. Pat Roberts has a huge interest in GPS (the technology) and how it affects Kansas industries. He will come see the exhibit (quickly), starting at 4 p.m. or so. Then we will go into the Kemper Creative Learning Studio (it’s the auditorium seating venue that’s right next to the exhibit) and he will say a few words about GPS.

Three others will also talk about GPS for about after the senator (they will have about five minutes each):

1.       Chuck Reagan – Speaking about Aviation applications -1964 graduate of Holy Cross College in Worcester, Mass., Reagan received his master's degree from the University of Kansas in 1966, and in 1967 he became the first person to earn a doctorate in philosophy from KU.

Reagan has also had a parallel career as a commuter airline pilot, flight instructor and charter pilot. He holds an Airline Transport Rating and jet rated. He flies as captain of the university's Citation Jet and holds the title of professor of aviation as well as professor of philosophy. He is a member of the board of directors of the National Business Aviation Association and is the K-State representative to the Aviation Advisory Board at Manhattan Regional Airport. He is also a licensed railroad locomotive engineer.

2.       Mark Bergkamp – Sedgwick County producer and board member of the Kansas Farm Bureau.  He’ll be talking about precision agriculture and the important role GPS plays.

Jon Cassat joined Garmin in 1993 to lead the advertising efforts of the company. Prior to joining Garmin, Cassat held a variety of creative and leadership positions at area ad agencies. As Garmin's manager of corporate communications and later as the director of marketing communications, Cassat helped establish a full complement of in-house advertising, communication, and brand-building services in furtherance of the company's commitment to vertical integration.

WASHINGTON, D.C. – Kansas Senator Pat Roberts who has led the charge to protect public safety, aviation, military and precision agriculture uses of Global Positioning Systems (GPS) from potential harmful interference today hailed the decision by the Federal Communications Commission (FCC) to reject a plan to create a new wireless network because it would have interfered with the GPS signal.
“Any Kansan with a GPS in his or her car was going to be affected by the interference this conflicting network posed,” said Roberts. “This is a particularly big win for public safety as well as precision agriculture, aviation and other industries critical to the Kansas economy that rely on seamless GPS communication.
“I’m pleased the FCC has agreed with my concerns and taken measures to block LightSquared's proposed network due to dangerous interference with GPS. While I remain committed to the continued expansion of broadband networks, there was simply too much at stake with this proposal that put our public and national security at risk. It would have been irresponsible to allow any network to interfere with a system so important to moving goods, defending our homeland and feeding the world.”
FCC’s decision late yesterday followed extensive testing by the National Telecommunications and Information Administration and other agencies, which concluded deployment of the LightSquared network would have caused irreparable harm to GPS dependent industries, such as aviation, defense, personal location devices and agriculture, because the spectrum used by LightSquared is adjacent to the spectrum used by GPS.

In November of last year, Sen. Roberts introduced an amendment to prohibit the FCC from using any appropriated funds to allow LightSquared to build out a broadband network until the agency could prove the expansion will not interfere with GPS. Similar legislation, championed by Congressman Yoder, was signed into law as part of the consolidated Appropriations bill.

Posted by Unknown at 6:30 AM No comments:

Join U.S. Senator Pat Roberts of Kansas at the GPS Adventurers Maze Exhibit in Wichita on Sunday, February 19th. Sen. Roberts has championed the importance of GPS technology for aviation, precision agriculture, and recreation (geocaching, anyone?). The Senator is scheduled to tour the exhibit beginning at 4:15 followed by an event in the Exploration Place auditorium.

All geocachers who visit and log and "Attended" for the GPS Adventures Maze earn a unique icon on their Geocaching.com profile – but how many can say they've also met a U.S. Senator at the maze? Attend the event to show the geocaching community's commitment to free and accurate recreational GPS use.

Posted by Unknown at 4:33 PM No comments:

I have posted an event, hoping it will get published, since the notice is so short

Posted by Unknown at 8:09 AM No comments:

Save the date - Special Guest

I have just been informed we we have a very special guest here on Sunday Feb 19th, 2012 4pm-5pm at the GPS Maze event in Wichita, Ks.

I can't divulge who the guest is until the press release has been sent out, but this person has a big interest in GPS.
I'll send out the press release as soon as I receive it on Thursday, just wanted give everyone as much notice as possible.
I plan on making a plea to try to get a geocaching event published, since the short notice was outside of my control.
Posted by Unknown at 8:19 PM No comments:

Sometimes we roll out the red carpet

Sometimes we roll out the red carpet when we have visiting geocachers.  Other times, we just roll... 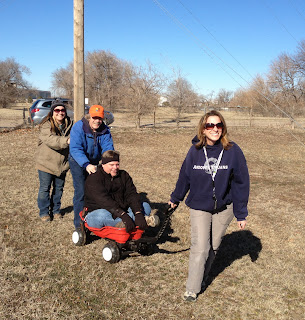 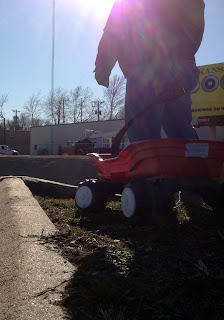 about to go after the cache 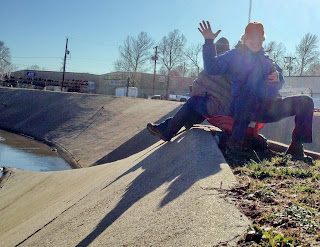 Yea, it's down there!

Our new muggle cards have been out for a few weeks now.  I have received a few questions about them.


The cards are for your use.  They were designed to promote the sport and the organization.    A few members helped pay for the cards.  If you would like to help out, please let me know. 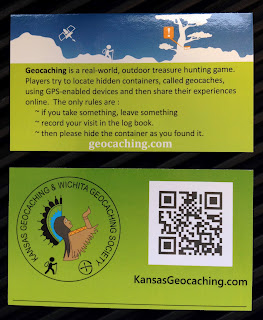 Input was requested from the members and incorporated in the design They were actually redesigned at the last moment to make the logo side sightly smaller and a thin blank line was added to allow you to put your name and / or cacher name on the card.

So, what are some uses of the cards?  Ever have a run in with the local law enforcement?  As you explain geocaching to them, hand them a muggle card.  It adds to the professionalism of the sport to be able to have something to hand out as apposed to just telling them about it.

The cards are not just limited to law enforcement, it is a great thing to hand out to anyone that has questions about geocaching.

If you would like some cards, pick some up and your favorite local cache. What, there are none in the cache, please drop some off.  Need more, or can't find any, get in contact with me.

Want a custom muggle card for you our your group that is just as impressive and professional as ours?  Let me know (geocache at geo-x dot org)

Sandy Barker the Lackey  from Groundspeak (Geocaching.com) spoke very highly of the cards and the use.

Speaking of Sandy, she was very appreciative of our group and all the things we have accomplished here.  She was taking many of our project ideas back to groundspeak for possible future use.

Feedback has been outstanding and the cards have been very well received, and I personally want to thank the members that helped move this project from a dream to a fruition.

Seems like a magic number right now... This is the 13th post of the new website / blog, and right now we are 13 caches away from 9300 active caches in Kansas!  We are currently at 9287 active caches.